April 16, 2017
I completed today a purchase of one more piece of Silicon Valley history, the EIMAC 100TH  Transmitting Triode Radio Vacuum Tube. For $22 I will receive a working triode, with the birght prosepct of lighting its filaments again perhaps not to transmit but at least to show its colors on the oscilloscope. 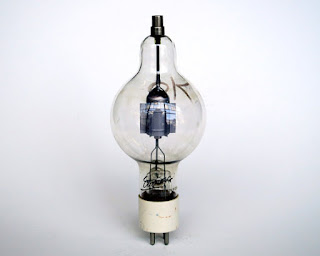 EIMAC operated in nearby San Bruno this was not an accident, as the San Francisco Bay Area was an early center of ham radio with about 10% of the operators in the United States in the early 30's. Incidentally in a new sense San Bruno is still a ham radio hub today. Except the radio has been replaced by the internet, and the communications device is YouTube, based in San Bruno.

There's are some more interesting technical bits. The EITEL company was a spin-off from Heintz & Kaufman with the purpose to produce tubes that worked on lower voltages than those available to the amateur market at the time. In 1932 two radio amateurs, Jack McCullough (W6CHE) and Bill Eitel (W6UF) who at the time worked at Heintz and Kaufman, decided to build high power transmitters to work some of the 20 meter overseas stations being heard in California. They found to their dismay that the expensive transmitting tube they purchased refused to work at 1,000 volts and that was all the high voltage their power supply would provide for them. This had the effect to reduce the price of building radio-transmitters and very likely contributed to their affordability and expansion of use at the time, without undercutting the high end of the market.  With the price of $24 in the thirties this is equivalent to about $450 in 2017. Certainly a much more affordable unit for the Ham radio population. 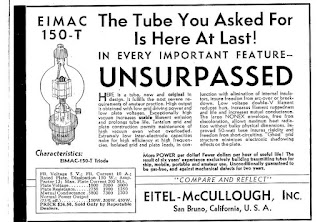 In late 1935 some tubes were sold to the U.S. Naval Research Laboratory for use in an experimental radar set that worked on 200 MHz. The 50T was the only tube that provided sufficient pulse power and that was able to stand up to the high plate voltage. More tubes were ordered by the military and in 1939 the first Navy sea radar tests used EIMAC tubes.The company later on moved its production from San Bruno to the nearby town of San Carlos.

The EITEL legacy still lives today as part of Palo Alto based CPI.

Now why, industrial maternalism? It turns out that a union organizing drive in 1939-40 by the strong Bay area labor movement was fought off by EIMAC by adopting a strategy of welfare capitalism which included pensions and other generous benefits, profit sharing, and such extras as a medical clinic and a cafeteria. This is not unlike Google and YouTube being the best place to work for years in a row. If you were working at Google or Apple today you may be thinking this is a new development or perhaps just a more recent one tracing back to the ascent of the high tech computing industry. Well you would be wrong, this mode of operation seems to have started much earlier at least as we see with EIMAC in the mid 30's.

Now when a symmetries inclined physicist's brain looks at "industrial paternalism" the immediate reaction is  -- Wait, what's up with "industrial maternalism"? A quick Google search find exactly zero results for the term, leaving an ample opportunity of defining it. So with that I have sent my colleagues at Google a message:

"Is it not time for some "corporate maternalism"?!  Not even a single hit on the term in Google search, the opportunity to define the term and make it a better cousin of paternalism. A caring version of welfare capitalism that works for us in the 21st century."

I better get back to the vacuum tube research.

Popular posts from this blog

Production Pro is hiring. We are always on the lookout for smart engineers. Apprentice Systems Engineer Transform the way film, theatre and television are created.  We’re looking for a systems engineer with experience designing software systems and algorithms to join our small and mighty team. Click here to watch ProductionPro shake up Silicon Valley for the arts! What we do: Films and plays are complex, creative endeavors, with hundreds of people working together on something that often changes daily. ProductionPro visually assembles all of a production's moving parts into one, dynamic platform – opening the door for a multitude of potential applications in the future. Why we do it: The entertainment industry has been underserved by tech for decades.  ProductionPro exists to help visual storytellers focus on doing what they do best – creating what the world watches. Who we are: Our collaborative team is a medley of experienced software engineers, fi
Read more

The battery on this Pixel 3 phone has swollen badly. What are the factors that led to a bad phone in less than 12 months? * Structurally deficient plastic? * Adhesive deterioration? * Poor energy management subsystem? * Cradle for overnight charging, while the phone keeps networking? * Substandard component heat characteristics? * Not accounting for battery aging? None of them, well all of them, but none of them. Design choices today are a combination of engineers making bad choices, and management pursuing short term financial goals. How does an organization fix this? There is only one way. Having a company proclaim clear, public, values about each of their products. Abstract values? Values that please the board of directors? No. Values an average consumer can read, understand and be happy about.
Read more

Just in the past month @Google.(4/13-5/13/2013). And that's a bit lower than usual as I took a one day vacation and was two days on an offsite and a week in NYC (note the flatter second week on the sent side). Information overload? The good news is we have great internal systems that help us cope with information. So in actuality this doesn't feel much more different than my private Gmail account which sees only moderate usage (now that I have moved many of the conversations to G+).
Read more