September 16, 2008
A capsule from SpaceX appeared at the Googleplex today. Here's a couple of pictures. Rumor has it that SpaceX founder Elon Musk will show up at Zeitgeist and talk about private initiative and space exploration. Given the company boasts the world's lowest cost flight to orbit he'll likely receive some attention from the audience. The capsule on these pictures is codenamed Dragon. At first glance the hatch hinges and rubber rings seem a bit weak, but this being a prototype, I am sure it'll change eventually. Here are some of the highlights of the capsule:
The current plan calls for a full long-duration system check-out in 2009. Dragon will perform approach, rendezvous, and breakaway operations with the Falcon 9 upper stage simulating an Interantional Space Station rendezvous. 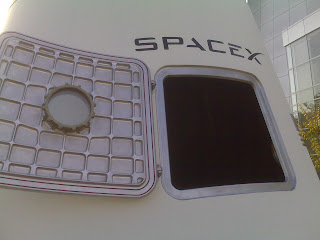 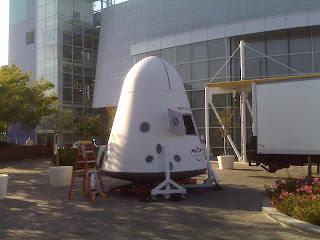 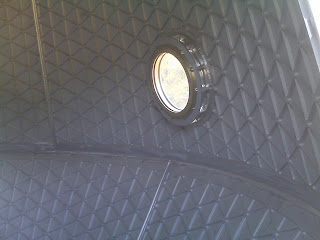 Popular posts from this blog

Production Pro is hiring. We are always on the lookout for smart engineers. Apprentice Systems Engineer Transform the way film, theatre and television are created.  We’re looking for a systems engineer with experience designing software systems and algorithms to join our small and mighty team. Click here to watch ProductionPro shake up Silicon Valley for the arts! What we do: Films and plays are complex, creative endeavors, with hundreds of people working together on something that often changes daily. ProductionPro visually assembles all of a production's moving parts into one, dynamic platform – opening the door for a multitude of potential applications in the future. Why we do it: The entertainment industry has been underserved by tech for decades.  ProductionPro exists to help visual storytellers focus on doing what they do best – creating what the world watches. Who we are: Our collaborative team is a medley of experienced software engineers, fi
Read more

The Oil and the Glory

The Oil and the Glory: The Pursuit of Empire and Fortune on the Caspian Sea by Steve LeVine. Steve LeVine covered Central Asia and the Caucasus for The Wall Street Journal and The New York Times for 11 years — starting two weeks after the Soviet collapse through 2003. From 1988-1991, LeVine was Newsweek's Pakistan-based correspondent for that country and Afghanistan. While the book doesn't have the documented rigor of say Taubman's biography on Khruschev it is quite clear that Steve knows very well the region; central Asia, the Caucasus and Russia. Moreover the book is vivid in both historical detail and the well rounded detail on the cast of players. It's importance is not only in shedding light the light on the region it covers, but even more so into understanding the dynamics at play in some of world's most influential corporations. The book has a great balance of historical context and a detailed account of the power struggles around the oil in the Caspian ba
Read more

The battery on this Pixel 3 phone has swollen badly. What are the factors that led to a bad phone in less than 12 months? * Structurally deficient plastic? * Adhesive deterioration? * Poor energy management subsystem? * Cradle for overnight charging, while the phone keeps networking? * Substandard component heat characteristics? * Not accounting for battery aging? None of them, well all of them, but none of them. Design choices today are a combination of engineers making bad choices, and management pursuing short term financial goals. How does an organization fix this? There is only one way. Having a company proclaim clear, public, values about each of their products. Abstract values? Values that please the board of directors? No. Values an average consumer can read, understand and be happy about.
Read more